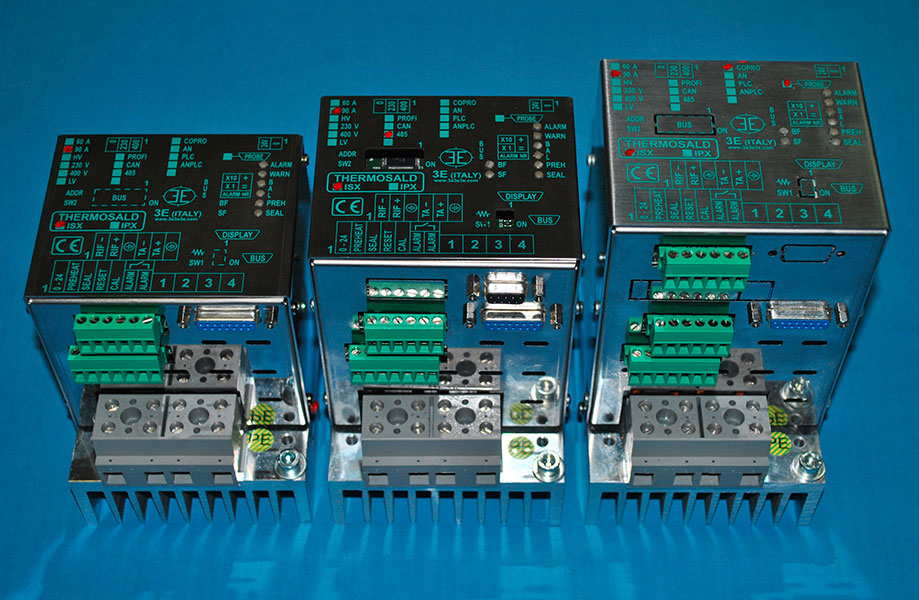 THERMOSALD ISX is a modular line of impulse thermoregulators with control on the secondary winding, configurable and compatible with each other, designed to meet all the demands of the IMPULSE SEALING market.

Impulse sealing is done using a sealing bar fitted with a band or wire, powered by a specific electronic device that supplies the instantaneous energy required to keep the band's temperature constant during the entire sealing process. No additional probes are necessary; the device simply reads the band's feedback parameters and checks the heating current in closed loop. The thermoregulator controls the temperature on the sealing line, keeping it constant with extreme accuracy even at high speeds: it avoids drifts during the production between the first seal and the subsequent ones and also prevents the support bars from overheating, which would lead to consequent mechanical problems caused by thermal expansion. The presence of a cooling air jet and other features can further increase speed and also improve the quality of the seal. This type of sealing is ideal for films that have to reach melting temperatures followed by the subsequent immediate and fast cooling of the films to prevent deformation. The thermoregulator receives a pre-heating command from the outside to allow the sealing bars to reach the optimal temperature before starting the production process. At the same time, as the bars close the thermoregulator receives a sealing command to reach the suitable temperature for carrying out the process. The thermoregulator is equipped with a troubleshooting program concerning all events occurred during the production process and is capable of diagnosing the causes of any failures as well as suitable remedies to restore working conditions. It can also monitor the characteristics of the band through the appropriate display or fieldbus.

• Fully automatic calibration up to -30°C

• The first seal is replicated exactly in the subsequent seals

• In-line analysis of the band's characteristics

• In-line sizing of the thermoregulator

• Compatibility with all previous models

Impulse sealing technology is used on all packaging machines, vertical and horizontal fillers, shrinkwrappers, shoppers and vacuum-packers, etc. and also in all processings which require the sealing or cutting&sealing of polyethylene film, polypropylene film, ecological film, single-component plastic material and plastic film in general.